Essaouira is Morocco’s age old port mixes mystical Gnawa’s traditions, hippy myths, surf hangouts and a thriving life with history and fishing ports. Only 168 km from Marrakech, it is there where the building stop being red, ochre or pink and switch to blue and white- the colours of earth and vegetation displayed by the colours of sea and sky. This elemental reorientation is matched by a change in climate. Where Marrakech is hot and arid, Essaouira is subject to winds that keep at bay the searing temperature of the interior.
It has become in few years the most favoured coastal town since it both offers contrast and an escape. Essaouira has managed to retain a laid back timelessness rarely felt in the seething streets of the busy cities. It is a relaxing place and a charming one too.

How to get Around :

•Get a certified and licensed city guide to show you around, explain properly the cultural sides of your tour and serve as a shield against the hustles of the market place vendors.
•The smallness of the city is an advantage to explore the ensemble without much need of means of transport. Cars or taxis are not allowed in the medina which is an eco friendly way to keep the air cleaner
• The Petit Taxis have meters but the drivers tend to forget using them with tourists. It is always good to negotiate the price in advance, but keep in mind that at night, the prices are 50% more than during the day.

•The Gnawa music festival is described as the world best jam session. Around every June thousands of world music fans gather to celebrate former slaves’ chants mixed with Jazz and rock artists’ performances. The stages become a theater displaying vibrant color and abounding live rhythms of great invigorating sensations.
•The festival des Alizées is a mix of Hispanic, Andalusian and Arabic music where artists from Spain, South America and Morocco find common cultural and historical grounds. 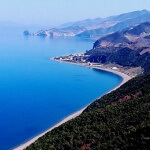