Noted for its buildings in shades of blue, Chefchaouen is situated in the Rif Mountains, just inland from Tangier and Tetouan. The city was founded in 1471, as a small fortress which still exists to this day, by a suffi to fight the Portuguese invasions of northern Morocco.[2] Along with the Ghomara tribes of the region, many Moriscos and Jews settled here after the Spanish Reconquista in medieval times.  In 1920, the Spanish seized Chefchaouen to form part of Spanish Morocco.

Chefchaouen is a popular tourist destination not only because of its proximity to Tangier and the Spanish enclave of Ceuta but also for the increasing numbers of people searching for natural beauty and the Rif experience as one distinction possessed by Chefchaouen is its blue-rinsed houses and buildings.

Chefchaouen is a popular shopping destination as well, as it offers many native handicrafts that are not available elsewhere in Morocco, such as wool garments and woven blankets. The goat cheese native to the area is also popular with tourists.

The countryside around it has a reputation for being a prolific source of organic food and local artifacts items such as blankets, djellabas and more. 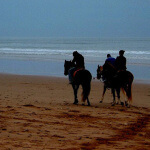 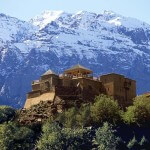 Back roads of the Atlas